Tropical Weather Discussion for North America, Central America Gulf of Mexico, Caribbean Sea, northern sections of South America, and Atlantic Ocean to the African coast from the Equator to 32N. The following information is based on satellite imagery, weather observations, radar and meteorological analysis.

Based on 1800 UTC surface analysis and satellite imagery through 2315 UTC.

Tropical Storm Isaias is centered near 32.0N 79.4W at 03/2100 UTC, or about 50 nm south-southeast of Charleston, South Carolina and about 100 nm south-southwest of Myrtle Beach, South Carolina moving NNE or 15 degrees at 14 kt. The estimated minimum central pressure is 993 mb. Maximum sustained winds are 60 kt with gusts to 75 kt. The NOAA Doppler weather radars from Charleston, Wilmington, and Jacksonville depict a ragged eye-like feature with the cyclone and the most recent GOES-16 visible imagery shows what appears to be over-shooting cloud tops on the east side of the apparent eye feature. The satellite imagery also shows scattered moderate to isolated strong convection in a pretty symmetrical pattern within 120 nm of the center in the NW quadrant. Scattered moderate convection in banding formation is within 30 nm of a line from 29N78W to 31N77W. Similar convection well away from the center is within 30 nm of a line that extends from southeastern Florida near 26N81W northeastward to 27N79W and to 29N78W. Isolated showers and thunderstorms are elsewhere north of 26N and west of 76W. Maximum wave heights being generated by Isaias are up to 28 ft.

A gradual increase in the forward speed of the cyclone is expected through tonight followed by a further increase in the forward speed on Tue. On the forecast track, the center of Isaias will approach the coasts of northeastern South Carolina and southern North Carolina within the hurricane warning area this evening. The center will then move inland across eastern North Carolina early Tue morning, move along the coast of the mid- Atlantic states on Tue, and continue across the northeastern United States Tue night.

A surface trough extends along a position from near 29N65W to 23N65W. GOES-16 satellite imagery shows disorganized scattered moderate convection from 24N to 27N between 64W-66W and from 26N to 28N between 66W-68W. The trough is underneath the southwestern periphery of an upper-level anticyclone centered near 31N62W. Strong southeast upper-level winds are currently over the trough. However, marginal environmental conditions could allow for some slow development of this system during the next few days. This system is forecast to move northwestward through Tue, and then stall several hundred miles southwest of Bermuda by the middle to latter part of the week. It has a medium chance of becoming a tropical cyclone during the next 48 hours. Please refer to the latest NHC Tropical Weather Outlook at www.hurricanes.gov for more details.

A far eastern Atlantic tropical wave has its axis along 19W from 02N to 19N, moving westward near 15 kt. The majority of this wave is embedded with deep tropical moisture associated with the African monsoon trough that extends into the eastern Atlantic. Scattered moderate convection is within 300 nm west of the wave from 05N to 10N and along and near the wave axis from 10N to 13N.

An eastern Atlantic tropical wave has its axis along 31W/32W from 02N to 18N, moving westward at about 20 kt. This wave is embedded within deep tropical moisture also associated with the monsoon trough in that area of the Atlantic. The total precipitable water (TPW) animation imagery indicates scattered moderate convection along and within 60 nm west of the wave axis from 05N to 09N and east of the wave axis within 60 nm of 06N30W. Scattered showers and isolated thunderstorms are noted from 09N to 15N between 30W-35W.

A central Atlantic tropical wave has its axis along 50W from 02N-16N, moving westward at 15-20 kt. Dry and stable air is impinging onto this wave from the northeast. Scattered moderate convection is near where the wave axis crosses the ITCZ, generally from 06N to 09N between 48W-52W.

A central Caribbean tropical wave has its axis along 76W south of 19N to inland Colombia near 07N76W. It is moving westward at about 10 kt. Scattered showers and isolated thunderstorms are north of 14N and between Haiti and Jamaica. The northern part of this wave may be helping to enhance scattered shower and thunderstorm activity that is occurring along the southwestern tip of Haiti and near the eastern tip of Cuba and inland Colombia between 72W-76W.

Rather weak surface high pressure remains over the basin, anchored by a 1016 mb high center over the northwestern Gulf near 29N94W. The associated gradient supports light to gentle anticyclonic winds north of 23N and west of 86W. Moderate winds are over the northeastern Gulf. Seas are ranging between 2-4 ft across the basin. Scattered showers and tstorms are seen over the Bay of Campeche, south of 20N between 91W-96W. Isolated showers are over the southeastern Gulf.

Mainly moderate northwest to north winds will continue across the NE Gulf today as Tropical Storm Isaias moves north- northeastward near the Georgia and South Carolina coasts. A weak high pressure ridge will persist over the N Gulf this week, maintaining gentle flow across much of the region with moderate winds expected in the southwestern Gulf.

Refer to the section above for details on a tropical wave over the central part of the basin.

A small upper-level anticyclone situated just north of the Yucatan Channel near 23N86W is maintaining mid to upper-level anticyclonic flow across over the northwestern Caribbean. An inverted northeast to southwest aligned upper-level trough extends from Hispaniola to inland Colombia near 10N78W. Isolated showers and thunderstorms moving westward are seen north of 15N and west of 78W. In the far southwestern part of the sea, scattered showers and isolated thunderstorms are south of 11N and west of 79W. Scattered showers and thunderstorms are just inland the coast of Colombia between 72W-76W. Scattered showers and thunderstorms are south of Hispaniola from 15N to just south of its coast near 18N and between 70W-74W. This activity is being supported by the inverted upper-level trough. Strong gusty winds are possible with this activity as were noted by a recent ship observation (3EBL5) near 16N73W. ASCAT data from this afternoon depicted fresh trade winds across much of the eastern Caribbean between 64W-73W, with gentle to moderate trade winds elsewhere across the basin.

The Bermuda High north of the area along with the eastward extension of the eastern Pacific monsoon trough will contribute toward fresh to strong trade winds over the central Caribbean from Tue through Fri. Elsewhere winds and seas are forecast to remain rather low through the remainder of this week.

Refer to the Special Features section above for details on Tropical Storm Isaias and on a trough that is along 65W from 23N to 29N.

A north to south oriented upper-level trough extends along 70W from the central Caribbean northward to 32N. In combination with very moist surface to low-level flow, it is helping to produce isolated showers and thunderstorms 23N to 29N between 68W-75W. A 1023 mb high is centered west of Bermuda near 33N68W. A stationary front enters the discussion area from 32N50W and extends to 31N59W. Scattered showers and thunderstorms are just ahead of the front within 30 nm of a line from 29N56W to 29N53W and to 31N50W. A surface trough is along a position from 29N37W to 20N39W. No deep convection is occurring with this trough as it is under dry air aloft and is surrounded by a stable atmospheric environment at the surface. A surface ridge extends from a 1026 mb high center east of the Azores near 38N22W to a 1022 mb high center near 26N52W.

As for the forecast, Tropical Storm Isaias near 32.0N 79.4W 993 mb at 5 PM EDT moving NNE at 14 kt. Maximum sustained winds 60 kt gusts 75 kt. Isaias is expected to become a hurricane, then move inland to 34.7N 78.1W Tue morning, well north of the area. Large seas north of 28N associated with Isaias will spread northward across the waters west of 75W today, then gradually subside late tonight through Tue night. A trough extending from 23N65W to 29N65W will move across the SE waters today. Environmental conditions are conducive for development during the next few days as this system moves northwestward near 15 kt, and a tropical depression could form later this week. 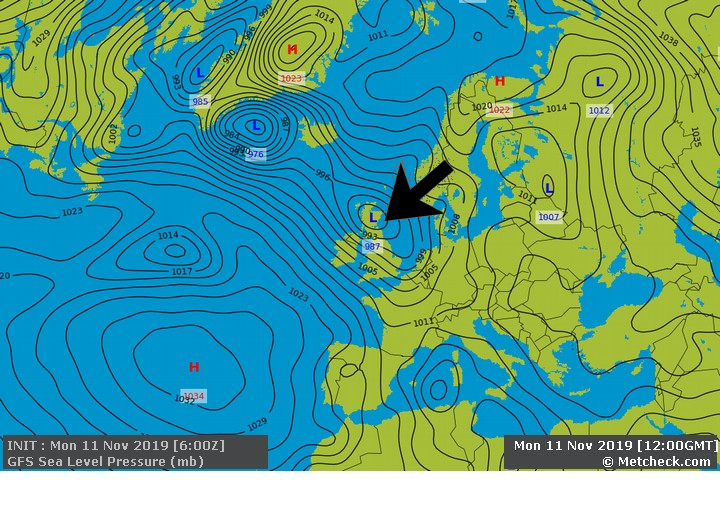 A rather complex period coming up in the weather over the next few days as Northwesterlies continue to dominate... 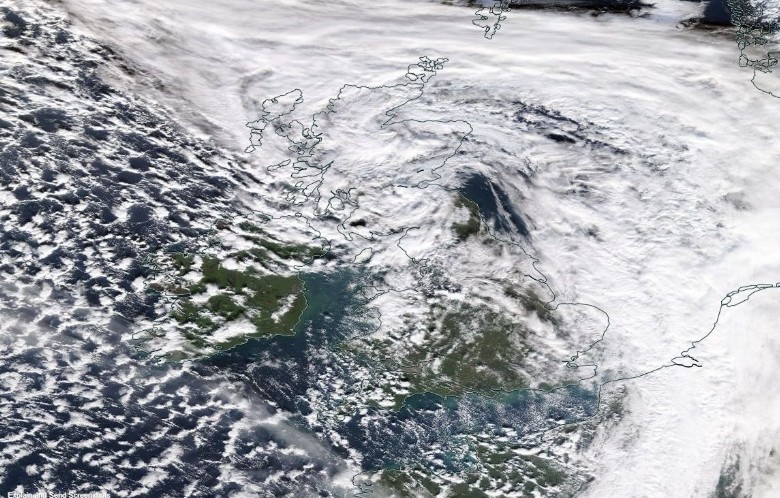 Showers across the UK with thunderstorms in the Med and the bush fires in Australia continue to burn... 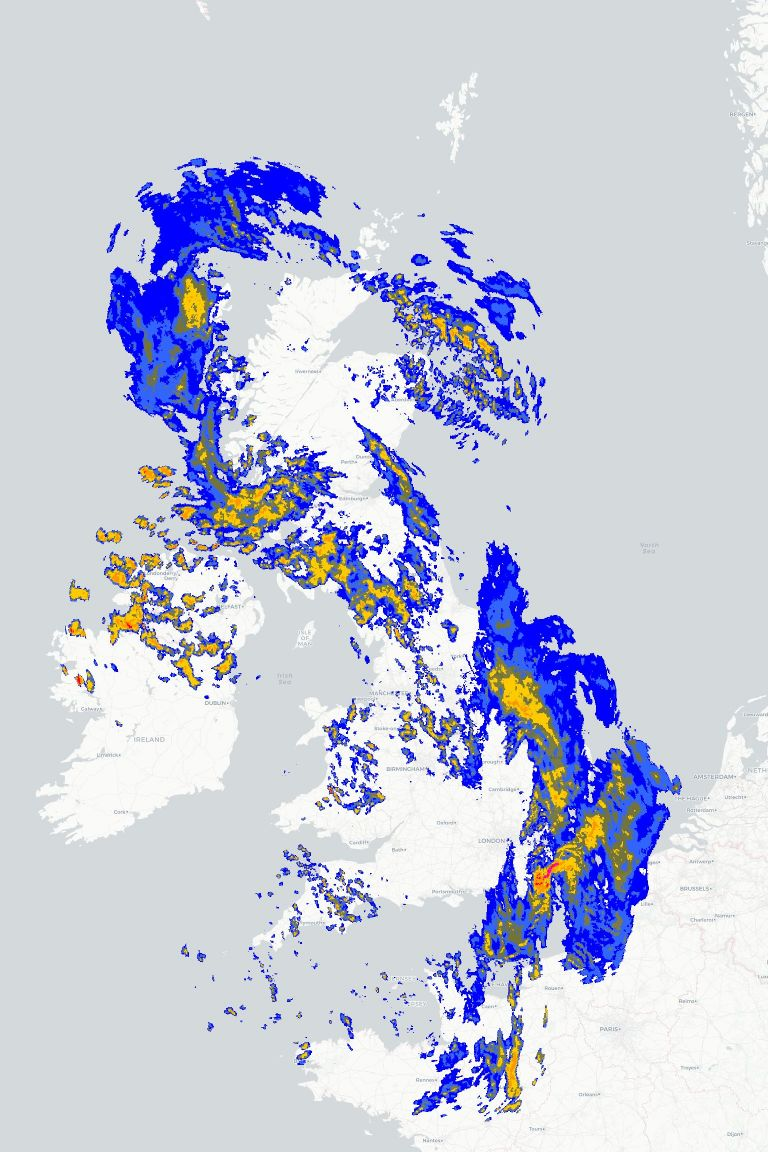 A wet start across Eastern areas this morning as a frontal system crosses the UK from the West, showers following on behind...

Want to see where precipitation is dropping out of the sky right now across the UK? No worries, check out the 15 minute radar below which loops through the last 6 hours of information.

Whoah! How clever is this? The Metcheck Thunderstorm Tracker Satellite allows you to see the developing storms across Western Europe and tells you whether they are growing or decaying. Every 15 minutes we take a snapshot of the cloud cover then measure the temperature and height of the clouds and show you whether the area of clouds are developing into thunderstorms and what direction they are moving in.

Live weather data from around the country displayed on Google Maps

These are the latest NCEP GFS model weather charts at Metcheck.

You probably hear a lot about the Jet Stream in the news. It's either too far North or too far South. The jet stream is identified as winds at 300mb (during Winter) and 200mb (during Summer). It is these winds which are responsible for driving and developing weather systems across the Atlantic.

Metchecks own GHX model charts out to 240 hours ahead

The Metcheck 7 Day Forecast takes the best from the GFS weather models and displays it in easy to read maps for the UK out to the next 192 hours ahead.

The Metcheck 7 Day Forecast takes the best from the GFS weather models and displays it in easy to read maps for the world out to the next 192 hours ahead.

Showing you where frost and ice is expected to develop out to 16 days ahead.